The Psychology of Empathy 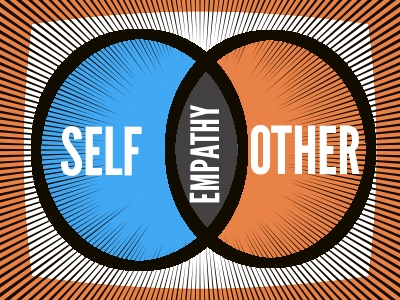 “That’s not empathetic, the way you treated me like this!”. How many times you heard that statement in our daily life situations, either we are in the middle of conflict disagreements or in casual conversation with co-workers or family members. Not much people know about “the inside” or psychological aspects of empathy itself. Empathy by definition is feeling connected and being in the shoes of others by using our intuition in order to recognized human emotions.

The empathy begins with intuitions and ends with the prediction for able to recognize somebody else emotions responses. There are five stages of empathy:
1. Intuition
Generally speaking, we can feel intuitively what other’s person emotions and feelings about something happened.
2. Connection
Next step is the beginning to feel “connected”.
3. Consideration
Once we feel connected, the mutual consideration is established and the ability to understand someone’s pattern responses in other people are becomes crucial part of developing empathy toward others.
4. Prediction
In this stage, we are able to predict each other’s responses judging by each other consideration on certain topic. The ability to understand each other’s responses become the basic element to be able to relate ourselves closely in the shoes of the other
5. Motivation
The last stage of empathy deals more into “the educational part” for influencing and also motivating others to become more an empathetic toward others. In long time return, being empathetic to others expected to become “a way of life” (Roy, 2010)

In adolescence, they are facing major development for cognitive skills, the need for self-control, or executive function. For girls, begins rising steadily at age 13 while boys are not begin until age 15 years old for perspective taking, which helps to promote problem-solving and avoiding conflicts between friends or family members. Girl’s affective empathy remains steady and high through their adolescence life while the adolescent males show a temporary decline especially in between ages 13 to 16 for the ability to recognize and responds to others’ feelings. (Shellenbarger, 2013).
In middle adulthood, early 50’s through 60’s ( Santrock, 2015), according to new study at the University of Michigan, more than 75,000 adults, women in that age group considered showing more empathetic feelings than men of the same age compared with younger or older people. The study found women in this stage; have increased their levels of cognitive abilities and experiences various levels of emotions in their first adult life span, and soon it will decline on the second half of their adult life span. The research also questioned whether the result based on individual’s age or whether it is what we called a generational effect due to exposed to historical social movement events. For example, American who was born in the 1950’s and 1960’s experienced civil right movements, anti war countercultures and equal human rights. In return, they could become more empathetic toward others for being exposed to those historical events (O’Brien, Konrath, Gruhn & Hagen, 2012)

How to Raise Empathy

The impact of virtual social media globally is creating our generations to have empathy deficit understanding among us and we become stranger to one another. McGill University conducted a simple experiment to find out how to raise empathy among strangers by spending 15 minutes together playing the video game Rock Band to undergraduate students and strangers. The experiment itself exposed the student participants to painful stimuli in different situations: alone, with a friend, with a stranger, between two strangers given a stress-blocking drug and between two strangers who had spent 15 minutes playing video game Rock Band before testing. Then the student participant had given ice-cold water and rates their pain. When they were experienced alone and sitting across from stranger, the pain rate is same. However, when they put their hand in ice water across from a friend who are watching them, they experienced pain higher since the presence of a friend near them makes their strong empathy level raised. The researcher also creates replication for this study to two mice. When the two mice do not know each other, they will feel less pain from a stimulus compared when they exposed the same painful experience alone toward familiar two mice. The research concluded that a shared experience though is superficial like playing a video game together can increase people from “stranger zone” to “friend zone and could create empathy between them ( Mcgill University, 2015).