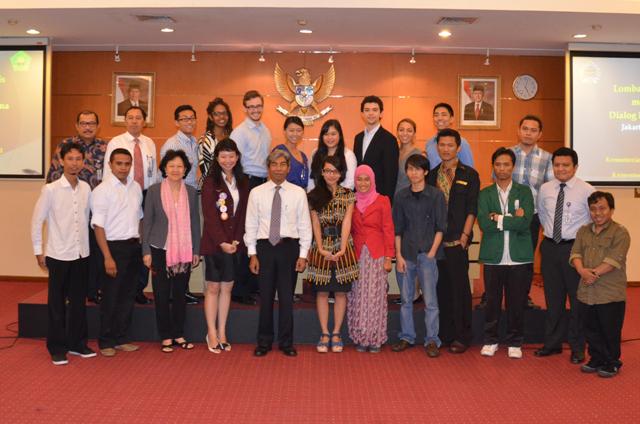 Religion is an example of non-physical attributes which inherently embodied in a person. According to Oxford Dictionary, religion is “the belief in and worship of a superhuman controlling power, especially a personal God or gods”.While according to Kamus Besa Bahasa Indonesia, religion is “ajaran, sistem yang mengaturtatakeimanan (kepercayaan) dan peribadatan kepada Tuhan Yang Mahakuasa serta tata kaidah yang berhubungan dengan pergaulan manusia dan manusia serta lingkungannya“. From two literal definitions above, we can sum up one fundamental resemblance which is crucial to be understood before we analyze or criticize issues surrounding religion. Religion is a belief system aimed to The Almighty, that translated into person’s concrete behavior to other fellow human being or his/her environment in daily life basis.

As a country with total populationranked 4th in the world, (The World Bank, 2012), not only do they have social and cultural diversity, but Indonesia population also possess religion diversity.  In pursuant of Indonesia’s 1945 Constitution, and later confirmed by PenetapanPresidenRepublik Indonesia Nomor 1/PNPS Tahun 1965, Indonesia accepted and recognized six different religions. They are Islam, Christian, Catholic, Buddha, Hindu, and Konghucu. These six religions are equal in the presence of Indonesia constitutional law, and it’s proven by the same kind of protection they are assured by country’s law (See PenetapanPresiden RI No. 1/PNPS 1965 for reference).

The protection which was given by Indonesia’s government to those six religions have an indirect implication. The government wants to emphasize that they are willing to put more effort so their citizen will leave peacefully among the religion diversity.Unfortunately until the meantime, conflicts among different religions still can be found among many places in Indonesia. In January 2013, grassroots in Sumbawa, Nusa Tenggara Barat, involved in a conflict which is caused by inter-religion issues (Asril, 2013). The phenomenon in Sumbawa caused many material lost, but the most significant impact is that it degrades the inter-religion tolerance quality in Indonesia.

Interreligion Conflict In The Eyes of Social Psychology

If looking through Social Psychology literature, it will be revealed that inter-religion conflict in Indonesia is a product of prejudice phenomenon. Prejudice is a hostile or negative attitude toward people from other group, based solely by their membership on that group (Aronson, Wilson, and Akert, 2007). Prejudice is not only a product of majority group directed toward minority group, but also the opposite.In sum.Everyone who holds membership in any group is at risk of becoming a subject or target of prejudice.

Prejudice principle is also the fundamental cause of many inter-religion conflict in Indonesia. Every religion is a system which is analogues to a group where members unite based solely by their faith and rituals to The Almighty. Membership in a group based by religion can triggers prejudice to group with different religion.These prejudicial potentialities to other group of religion are the source of discriminative behavior toward other religion group. Discriminative behavior among different religion groups can evolve into a local or national scale social problem.

According to Baron, Branscombe, and Byrne (2009), despite the fact that prejudice is a very common social psychological phenomenon which mostly grows out of inter-group interaction in daily life, there are ways to ease the level of prejudicial phenomenon. Six conditions below needs to be fulfilled to create a prejudice free environment: (1) interdependent, (2) shared goals, (3) equal status, (4) informal interpersonal contact, (5) repeated contact, (6) social norms of equality. From six conditions above, Indonesia government in fact have already attempt to ease prejudice through many interreligion dialogue activities.

Interreligion Dialogue as a Social Intervention in Grassroots

If we trace back and try to analyze all the facts surrounding interfaith dialogue, it will be clear that the main obstacle yet defeated is the lack of such activity among grassroots. All this time, government has always been very active to arrange interreligion dialogue where various representations from religious organization in Indonesia can participate. Moreover, Indonesia government often held such activity with other country representation. The latest example is a bilateral discussion between Indonesia and Germany in April 7th 2013 in Manado to discuss about religion diversity. Government’s effort to held such dialogue deserved special appreciation. But still, all parties involved have to admit that Government’swill to facilitate the interreligion dialogue is only effective at increasing interreligion dialogue among elites. This was caused not only by no grassroots participation in such activity, but also because they don’t have any access to the information about topic and results of the interreligion dialogue activities.

The lack of opportunities for grassroots to take part in interreligion dialogue activities, and also lack of information about topics and results of such activities, is a major drawback for Indonesian government. On one side, Government’s strategy to increase tolerance among different religion citizen through interreligion dialogue is a conceptually flawless idea, especially when it is designed systematically in accordance to six principle for reducing prejudice among different religion group of people. But on the other side, grasrootswho are potentially more vulnerable to show aggressive behavior including conflicts between different religions, are those who actually have no  opportunity to take part in such important dialogue activities (Laeis, 2013).

Indonesia’s current condition where there is a significant lack of interreligion dialogues in grasroots,furtherstrengthening society’s needs of a party who are capable on actively contributing to  the enforcement of such kind of dialogues. Youth generation is the party who expected to be the answer to this challenge. There’s a clear and defendable reason why youth is considered as the best side to answer the challenge in increasing interreligion tolerance among grassroots. From Developmental dan Cognitive Psychology disciplines, we can found a theory that explains why youth has the cognitive capability to comes up with the best solution and strategy in order to intensify dialogues among different religions people in grassroots.

Jean Piaget, a Swiss psychologist, proposed four stages of cognitive development in human; sensorimotor stage, preoperational stage, concrete operational stage, and formal operational stage. These stages is age-related and consists of distinct ways of thinking. Each stage is characterized by a set of systematic cognitive functioning which then determines how far someone can understand his/her environment in cognitive terms (Santrock, 2008).

According to Santrock (2008), when someone reaches adolescence (11-15 years old), they have reached the last stage in cognitive development stages, which is called as formal operational stage. In formal operational stage, someone have moved beyond reasoning only about concrete matters to a more abstract, idealistic, and logical ways of thinking. The abstract nature of formal operational stage in adolescence or youth makes someone capable of understanding and engage in abstract speculation in oder to produce an ideal outcome for abstract problems. Some examples of abstract issues are justice, law, culture, and ethics. Before someone has fully emerged to formal operational stage, they are not capable cognitively to criticize and analyze those abstract issues. This is why youth generation has the responsibilities to come up with innovative ideas in order to increase interreligion tolerance among grassroots through implementation ofinterreligiondialogue activities.

In accordance with what have been explained earlier about prejudice, social intervention, and youth’s responsibilities to solve the interreligion challenge, the key solution seems pretty clear and straightforward. Namely, youth only has to arrange more dialogue activities among different religions in grassroots. But one point that needed to be highlighted here for the youth is to remember that interreligion dialogue activities in grassroots must have distinctive qualities from the same activities held for elites. Elites are different from grassroots. They both have very distinctive characteristic, to name a few such as educational and socioeconomical background.  These distinctive qualities makes them need different kind of dialogue to ensure its effectiveness.  The main topic, format, and content of interreligion dialogue involving grassroots will have to adapt to their characterictic.

This is the main challenge for Indonesia’s youth generation. They are expected to be able to formulate a set of topic, format, and content for interreligion dialogues so it will be effective when implemented among grassroots. It is not an easy or simple task. The youth have to think critically, gather many relevant data, and sensitive to many issues about religion differences among grassroots. This responsibilities is what makes youth differs from pre-youth generation. According to cognitive developmental theory by Santrock, pre-youth is on concrete operation stage, where they are still not capable to understand abstract issues, including conflict among different religions. But when someone reaches formal operational stage, namely youth, they are now capable to think in abstract, idealistic, and logical ways, including all that we have discussed before about interreligion conflict among grassroots in Indonesia.

As a developing country with high population, Indonesia citizen is unique in many aspects, including religion. Differences in religions is the origins of group polarization built upon their religion identities. This imaginative polarization among Indonesia citizen is what then becomes the basis of prejudice. In social psychology, prejudice is a hostile or negative attitude which then can transform into discriminative behavior toward other group based on different identities. It is obvious that prejudice is the origins of interreligion conflict in Indonesia.

Conflict among different religions should be immediately mitigated through a social intervention programs, which is interreligion dialogue activities. Unfortunately until this moment, those activities are only directed toward elites in Indonesia, and forgot to take special account for grassroots. This particular conditions is an opportunity for Indonesia’s youth. Dialogues for grassroots can not use the same ‘recipe’ like those held for elites. So now, youth’s biggest task is to come up with an innovative strategy about what should be done in grassroots interreligion dialogues so that it will be effective in increasing religion tolerance among them. This is not an impossible task nor it is an easy one. It’s very possible for youth with their cognitive capabilities to come up with dinstinctive and spohisticated strategy aimed at increasing the effectiveness of interreligion dialogues among grassroots.